Some time ago I went to Warsaw for a sound conference European and American points of hearing. Are they different? where lectures were given by (!!!) Richard King, Bruno Tarrière, Larry Sider, Jörg Lensing and Nikodem Wołk-Łaniewski. Can’t say enough how great it was, three days full of inspiring lectures given by the best in the industry.

As always when traveling I took my recording rig with me to do some field recordings in the meantime. I love exploring and finding sonic differences between cities. After contacting my sound friends from Warsaw I chose some spots which seemed to be interesting.

The first (and obvious) sound spot was a hotel I stayed in. As always, I did full sound coverage of a hotel room: doors, bathroom, light switches, room tones and so on.
It was located in the very center and had a very busy, constant traffic wash by the window. I left the recorder running at different times of a day, grabbing hours of different intensities and tonalities. Here is a friday night atmosphere, recorded from the 6th floor window:

In the hotel I found interesting elevator sound:

The theme photo was taken from the 30th floor terrace of an old skyscraper in the very center, which was rather disappointing sonically – lots of people (even it was 11 pm) and heavy HVAC noise.

One of my friends pointed me good sound spot – two-tier bridge with one of them for trams and pedestrians. I managed to record nice trams passes there: 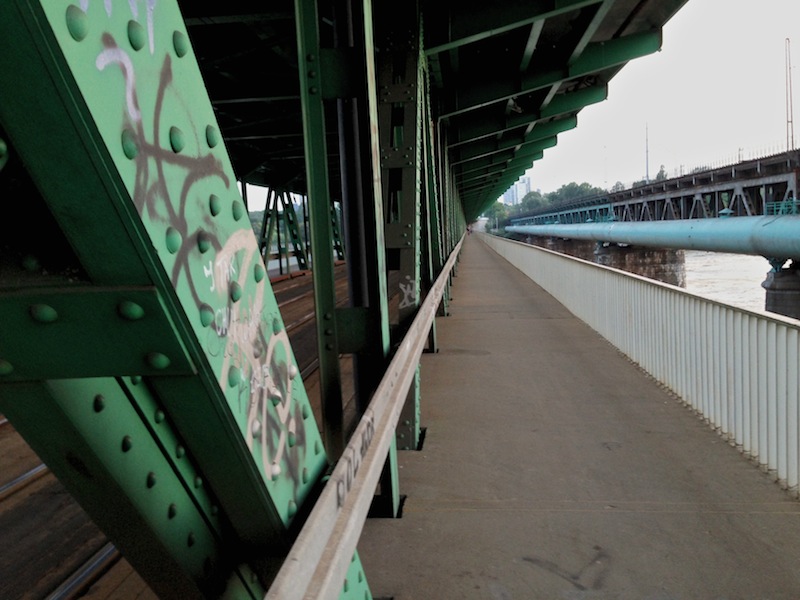 But the best destination was the underground. I love the sound of underground approaching and pulling out. High speed of cars, acceleration and braking, tunnels resonating the sound and air moved by the cars creates fascinating sounds. That amount of metal moving fast in such reverbant environment can’t sound boring. Some of the passes sound as someone would heavily play with pitchbender on it.

Every escalator sounds different, but some of them have its own character: