So due to the amount of work in the studio, it has been quite a time since I posted something here. But I wanted to share results of my recent experiments with the setup I wanted to try for a long time.
Having Sanken CO-100k microphone which captures ultrasonic sounds, I was always wondering how cool it would be to use it in a parabolic dish. With great help and support from Jon Strandberg from Telinga microphones, we found a solution to mount it in their dish I already have. I use it with Telinga Stereo MK2 mic, which gives amazing possibilities of isolating sounds, giving nice stereo image at the same time.
So I got Universal MK2 handle with instructions from Telinga, how the mic should be mounted. The focus point of of the dish is around 12cm from the back of it, so I placed Sanken facing outwards. I had some concerns, Sanken’s directional pattern is quite directional in the highest frequency range, but attaching it facing inwards would make the setup incredibly bulky (the mic is quite long). 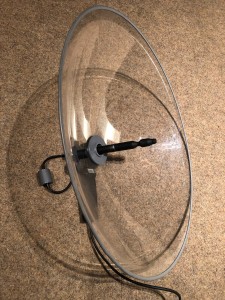 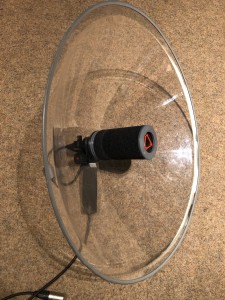 I was curious about the directionality, frequency range and general sound of the setup. Below you can see and hear sounds recorded on it, compared to ones recorded in the very same location a week before on Telinga mics.
Of course Sanken is a mono setup (but I was thinking of adding a pair of Usi Pro mics on both sides of Universal holder), but you can see how they compare.
Sanken recordings were done @192k whereas Telinga mic @96kHz. Each sound example on soundcloud is accompanied by pitch shifted versions, first, one octave and then two octaves below. To show the high end and this is what we use Sanken for!

The general answer is – it is VERY directional. Just like the original Telinga setup. It also has extended frequency range. Yet, not as one could expect from Sanken CO-100k placed close the source. It depends of the source – of course frogs aren’t ultrasonic for sure (yet you can hear some bats in the recordings), but the ability of pitching 2 octaves down, keeping the sound quite natural is amazing for sound design purposes.
It doesn’t have as much highs as closely placed microphone indeed, but hey – I was recording objects being around 6-8 meters away.
The samples were treated with eq and a touch of RX, to remove unwanted noises.
The dish also gives specific 300-500Hz resonance, probably more prominent than with the regular Telinga mics. But it all can be treated in mastering/mixing process really well.

So it works as a parabolic setup. From what I have learned so far, it has potential for extreme pitch shifting, yet you can’t expect miracles – air absorption with the distance and mic positioning narrows 100kHz magic. Probably Schoeps CMC6XT mics or Sennheiser 8000 series would sound similar. And – who would have thought that frogs pitch shifted one octave down become crows!
Now I just need some time to record more…