I was asked once how many sounds Krakow (the city I live in) has. How many specific sound areas there are? Well, there are a few. But living in Europe, in a city with a history, I’m familiar with a specific sound that is present in most of city soundscapes and which is characteristic for Krakow. Trams. The sound which is loud and low enough to be heard inside buildings, even few streets away from tram routes.

Of course its sound changes over time, since new trams (and tracks) are way quieter these days, but there are many sounds related to them. Low rumble, wheels squeak/squeal on corners, bells, tram body rattle, electric engine whine and so on.

As every city has its own sound, same goes with trams. There are different tracks, different tram cars and space between buildings which resonates and amplifies it, unique for every city I know.

I did my first recording focused on trams few years ago, on New Years Day morning. It’s sound recordists day for me, since it is very quiet for long, no heavy traffic at all and mostly only public transport.

Here are some sounds from that session:

And some wheels squeaking on corner from another session:

I much prefer sound character of older trams, which don’t have that electric engine whine and have much more suspension/body rattle and rumble.

Preparing for incoming project (which takes place in the 60′), I wanted to record some historic ones to create general atmosphere of the city. There are some very old tram cars in few cities here, but they are used only for special occasions. But I have found that in the other city, there is one tram line where they use old type tram car. It was produced over 60 years ago and is still used daily on this particular line as an attraction.

So I prepared a recording trip. Get there before the dawn to record the first tram that day, when I hoped city will be much quieter. Before the session, I have recorded very nice and wide night atmosphere of a city square with distant traffic tone:

And some morning birds:

People managing trams were so nice, that they allowed us to do some onboard recordings. I chose DPA 4060 pair for EXT onboard recording, attaching them with a magnet clip and a tape to the back of the car. Those mics sound great and full, and are incredibly easy to attach. I was impressed how great it sounded (and hurray for Sound Devices limiters!): 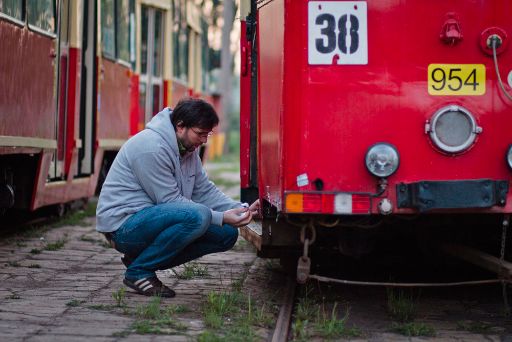 And this sound has big potential to become some evil machine or clanky train sweetener: 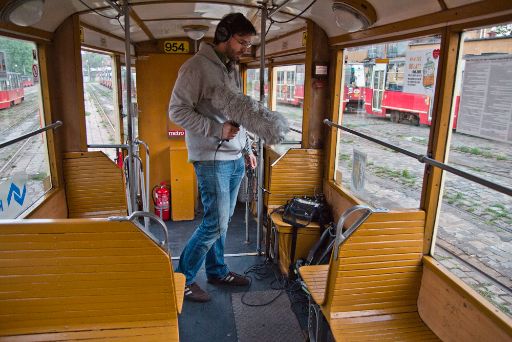 Later I picked some EXT passes. The sound is so loud, that external traffic noise was not a problem: 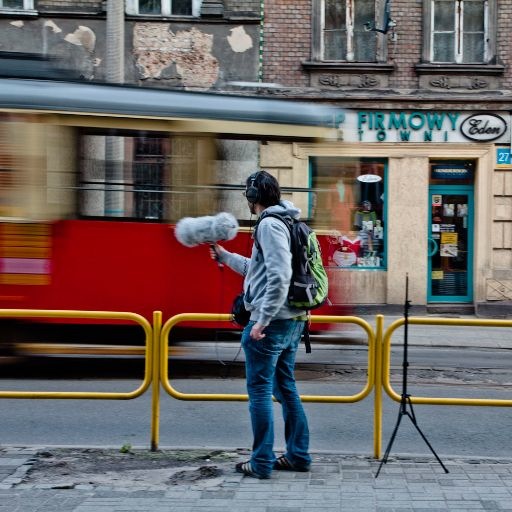 Waiting for the second part of the session, where I wanted to record some maneuvers and internal sounds, wandering around looking for interesting sounds I have heard distant metal hits. Approaching it, it turned out to be a scrap-heap. People working there allowed me to record while they do their job. And again, without intention I found great source of sounds. For sure it will become my next car crash sequence sweetener:

And a scrap-heap is definitely my next destination for a recording session.

After grabbing some other sounds around, we came back to the trams depot to record more sounds.

I picked maneuvers, some great wheels/track squeals and the internal sounds: steering winch, levers, doors, bells and footsteps inside.

At home I found that I can easily turn those EXT onboard sounds with EQ, Altiverb and Lowender into sounds heard by the window.

There is a great Budapest scene in Tinker, Tailor, Soldier, Spy where similar sound of distant low tram rumble is used for creating tension. Works very, very well in this particular scene.

This was a very resultful recording trip, which also gave me ideas for future recordings.
The sounds I collected, will greatly help me creating character of a city from the 1960′.

Photos by my friend Wojtek Iskierka.